6 Different Types of Espresso Drinks You Need to Try

Hot or cold, strong or mild, microfoam or macrofoam—no matter what your preference is, there’s an espresso drink for you! With third wave coffee on the rise and gaining popularity over the years, there’s more than enough espresso drinks for any level of connoisseur.

Espresso is made by pushing super pressurized hot water through finely ground coffee beans. Because of the huge amount of pressure required to make espresso—130 pounds per square inch, to be exact—you’ll need specialized equipment to make it. If you don’t have an expensive espresso machine, you’ll have to head down to the local coffee shop to get your espresso fix.

With all the options on the menu, though, it can be hard to decide which drink to get! I mean seriously, have you ever walked into a coffee shop with a chalk board full of drinks you don’t know anything about. Sometimes it’s stressful ordering a cup of coffee let alone espresso these days. Today we hope to make your decision easier by sharing our six favorite espresso drinks with you.

For the longest time, we thought lattes were made with strong drip coffee.

How embarrassing, we know!

Lattes also get topped with a little bit of foam. The thin layer of foam that tops a latte is called “microfoam” whereas the thick layer that tops a cappuccino is called “macrofoam.” The layer of microfoam on top of our lattes makes the latte art we all love possible! People are so talented…

Sadly, if you get your latte iced, you’ll miss out on the foamy goodness and the art! Iced lattes are made with espresso and chilled milk, not steamed, so it doesn’t get frothy and can’t be drawn on. They are nice and refreshing on a hot day, though!

If you want to make some lattes at home you can view the top two best selling latte machines below and then learn how to make lattes at home here. A lot of people seemed to enjoy our process!

What is a Cappuccino?

Cappuccinos are pretty similar to lattes. They’re made with espresso, steamed milk, and foam just like lattes. The main difference between the two drinks is that cappuccinos are made with a lot more foam. If you want to try your hand at making some cappuccinos at home or even lattes, give this espresso machine a test drive. It has over 5000+ reviews and it’s a reasonable price, not like the other one we mentioned that is more professional grade.

In Italy, cappuccinos are made with equal parts of espresso, milk, and foam. In America, we like our cappuccinos extra frothy, so we put more foam on top. Yum! Be sure to use non-fat or skim milk to get the best foam if you’re creating cappuccinos or lattes at home.

The first cappuccino was made in Italy in the early 1900s after the espresso machine became popular. Europeans had been drinking similar types of espresso drinks for centuries, but that was the advent of the modern cappuccino with thick layers of foam that we all know and love!

What is an Americano?

The Americano is made with one shot of espresso and enough water to fill a six-ounce cup, kind of like these typical 6-ounce coffee mugs you see in any diner. The water dilutes this type of espresso so that it tastes more like drip-style coffee. If you don’t know what a drip-style of coffee tastes like, be sure to read our article to find out everything you need to know about drip coffee.

Americanos are usually served with sugar and steamed milk on the side and enjoyed throughout the day. If you’ve never tried this type of espresso without milk before, this drink is a great one to start with because it’s milder than a lot of other espresso drinks!

Sometimes we have to ease into things to enjoy them, especially for more robust coffee flavors.

What is Red Eye Coffee?

Maybe you can even ask your barista to pour it in this awesome red coffee mug from YETI.

This type of espresso drink is called the “red-eye” because it’s supposed to give you enough energy to stay awake on a red-eye flight from the West Coast to the East Coast. The next time you get on a long flight, you’ll have to order this drink at the airport and tell us if it works!

What is a Ristretto Shot?

When making a ristretto shot, less hot water is pulled through the coffee grounds. This makes the shot smaller and more concentrated, packing a punch full of flavor.

You would think that a more concentrated shot of espresso would be more bitter, but ristretto shots are sweeter and richer than regular espresso shots. They have some nice, aromatic floral notes, too.

You can order this shot as a double or a single. It has less caffeine than regular espresso, so go for a double shot if you need extra energy!

What is a Cafè Breve?

For those days when whole milk just isn’t creamy enough, order a cafè breve. It’s made with espresso and steamed half and half, so it’s super-rich and delicious. It’s higher in calories and fat than a regular latte, but we think you should treat yourself!

Steamed half and half gets fluffier than steamed whole milk, so this type of espresso drink has nice, thick foam even though it’s just a latte. You’ll sometimes hear it called a breve latte or just a breve coffee, so switch it up and order it using one of its other nicknames!

Breve coffee is often served as a dessert beverage, but some people like to enjoy it in the morning, too. This coffee is already sweet enough to be served for dessert, so most people don’t add sugar to it. But if the natural sweetness from the half and half isn’t enough for you, you can add flavored syrups to it
to make it even more decadent!

Fun fact—breve means “short” in Italian. We hope that the line at our local coffee shop is short because we can’t wait to try this breve latte!

There
you have it! Those are our six favorite espresso drinks. Are you going to order
any of them? Let us know which ones you’re going to try in the comments section
below!

For more coffee inspo, follow us on Instagram @coffeesesh. Also if you want to learn more about making coffee from people just like you, be sure to join our private Facebook group here at Daily Coffee Talk. You’ll be able to learn how to brew, how to roast and most importantly how to enjoy the perfect cup of coffee!

Thanks for reading with us and happy brewing! 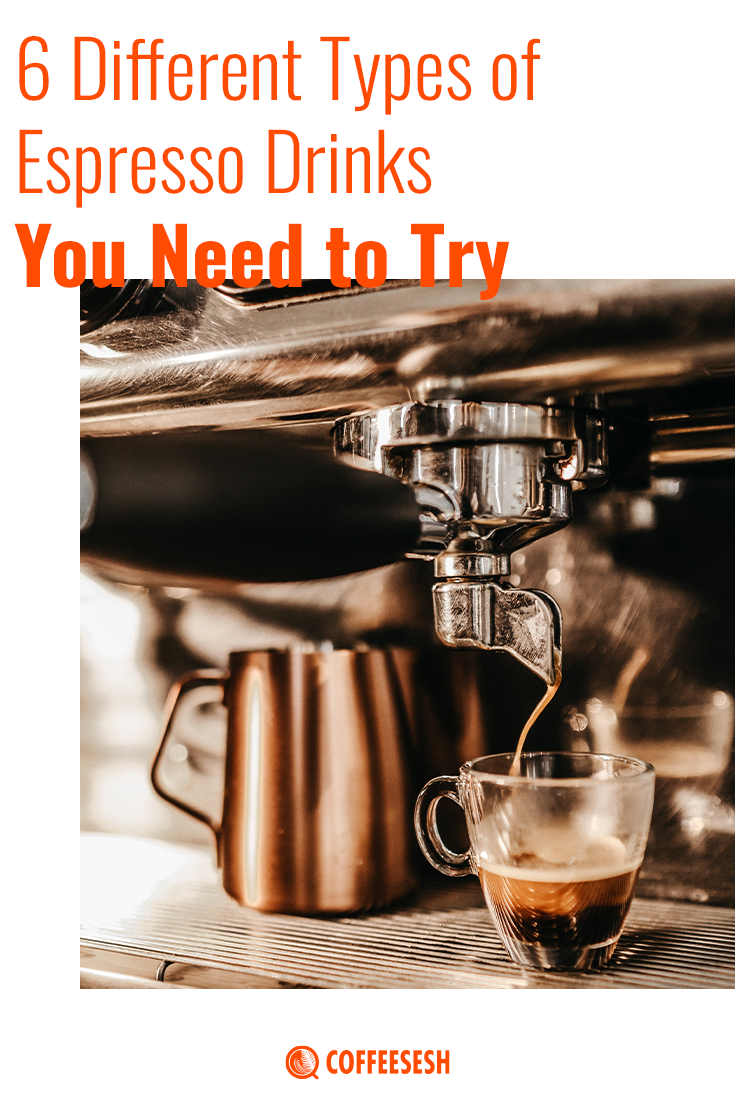 Pin107
Share
Tweet
Share
WhatsApp
107 Shares
Previous articleIs Coffee With Cream And Sugar Bad For You – CoffeeCess
Next articleWhat is the Best Tasting Coffee in the World?