Coffee – the sweet, aromatic beverage that wakes you up and gets you going every day. This is a drink praised by many as the ultimate pick- me- up for the morning after a long night. It is said to have magical effects of calming down the boss during a hectic day and helping employees get through the dreary moments when time seems to stand still.

Coffee is truly an amazing drink, don’t you think?

However, for some people, coffee could be their worst nightmare, literally keeping them up at odd hours of the night. Some people get really nervous and jittery after a cup of Joe while others develop terrible headaches and migraines.

Whether you are energized or totally destroyed by your morning brew, these are the side effects of caffeine on your body. Some people enjoy the buzz while others feel physically sick. Those who experience unpleasant side effects but still love the brew have been advised to try decaf coffee. But what is it?

What is Decaf Coffee?

Decaf coffee is a shorter form of saying decaffeinated coffee, which is coffee that has most of the caffeine removed from the bean before roasting. Caffeine is a stimulant that is naturally found in coffee beans. It is a drug that rouses your heart, central nervous system and your muscles.

The type of coffee and the brewing process used both affect the level of caffeine. Robusta coffee beans contain more caffeine than Arabica beans. The caffeine content also varies depending on how long your coffee brews and the coffee to water ratio you use. A drip coffee cup may contain more caffeine than a shot of espresso while French Press coffee will have the highest caffeine content because of how long the coffee steeps in water. Instant coffee is said to have the lowest amount of caffeine in terms of brewing methods. For a more in-depth conversation of what decaf coffee is, check out our article here!

Decaf coffee on the other hand has gone through the process to remove caffeine, although it will still contain 1-2% of caffeine. The Swiss Water method is the most natural way to decaffeinate coffee. How it works is: green coffee beans are soaked in water for hours to extract the caffeine and then they are passed through pre-treated charcoal filters to remove the caffeine. This process is repeated until up to 99% of the caffeine has been removed from the beans. Even though some volatile coffee oils are lost in the process, it is a more favorable method of decaffeination because unlike the other methods, it does not involve any chemicals.

Decaffeinating coffee beans will make the beans lose some aspects, like taste or flavor, but the nutritional value of decaf should be almost identical to regular coffee, except for the caffeine content. Decaf coffee is great for those who want to drink coffee but want to avoid caffeine. It is an amazing alternative for those who go crazy on coffee but still want a hit!

Let’s take a look at 8 benefits of decaf coffee down below!

1. Decaf Coffee is Rich in Vitamins

Coffee is a rich source of magnesium, potassium and manganese which all help the body cells to absorb other nutrients. Decaf coffee is rich in Vitamin B3 (Niacin) that helps remove toxic substances generated by stress from the body. It also has Vitamin B2 (Riboflavin) that helps to improve the immune system and Vitamin B5 (Pantothenic Acid) that all help to break down carbohydrates and keep the body adequately balanced.

Decaf coffee contains healthy amounts of resveratrol— which is a plant compound that acts like an anti-oxidant. The resveratrol in coffee is what brings about the bitter taste. Studies have shown that resveratrol influences the enzyme that controls cholesterol production and is essential in burning fat and balancing fat metabolism.

If it’s as easy as drinking coffee to burn calories, why not!

Decaf coffee contains phosphorus that helps the brain improve memory while the chlorogenic acid is reputed to reduce the risk of neurodegenerative diseases such as Parkinson’s and Alzheimer’s. The nutritious elements in coffee have correlated with hindering age- related mental decline.

The University of British Colombia and Harvard Medical School created a report on men and coffee habits that they named “Arthritis and Rheumatism” in May 2007. The study reported that men who drank 4 or more cups of decaf coffee in a day lowered the risk of developing gout as compared to men who did not drink coffee.

If you didn’t know, gout is a form of inflammatory arthritis developed with people that have higher levels of urine acid in their blood.

The caffeine in regular coffee, when taken in excess, can overwhelm the central nervous system, causing anxiety, restlessness and trouble falling asleep. Switching to decaf coffee eliminates the effects of caffeine, while giving you your morning wake-up call and at the same time, not keeping you up at night!

7. Feeling Queasy Will be a Thing of the Past

Caffeine has different effects on different people. People who are sensitive to caffeine, those with medical conditions, or on prescription pills that may not interact properly with caffeine, should change to decaffeinated coffee. It has a reduced risk of acid reflux and heart burn caused by caffeine. Pregnant women and children are also advised to stick to decaffeinated coffee if they cannot avoid coffee altogether.

Researchers at the Norris Comprehensive Cancer Center of Keck Medicine at the University of Southern California (USC) did a study that was published on April 1, 2016, showing that coffee consumption can decrease the risk of getting colorectal cancer.

According to them, the melanoidins generated from the bean during the roasting process have been theorized to improve colon mobility. Diterpenes found in beans called cafestol and kahweol may prevent cancer by developing the body’s defense against oxidative damage.

There you have it. 8 good reasons why you should forget the bad-mouthing that decaf coffee has received in the past and try it out, even if it is just for the health benefits! Who knows, you might actually enjoy your cup of decaf Joe.

Have any article topics you’d love for us to cover? Let us know in the comments down below.

And don’t forget— join our Coffee Sesh community of 80k, and growing, on Instagram! Also if you want to learn more about making coffee from people just like you, be sure to join our private Facebook group here at Daily Coffee Talk. You’ll be able to learn how to brew, how to roast and most importantly how to enjoy the perfect cup of coffee!

Thanks for reading, we’ll brew ya later. ☕️ 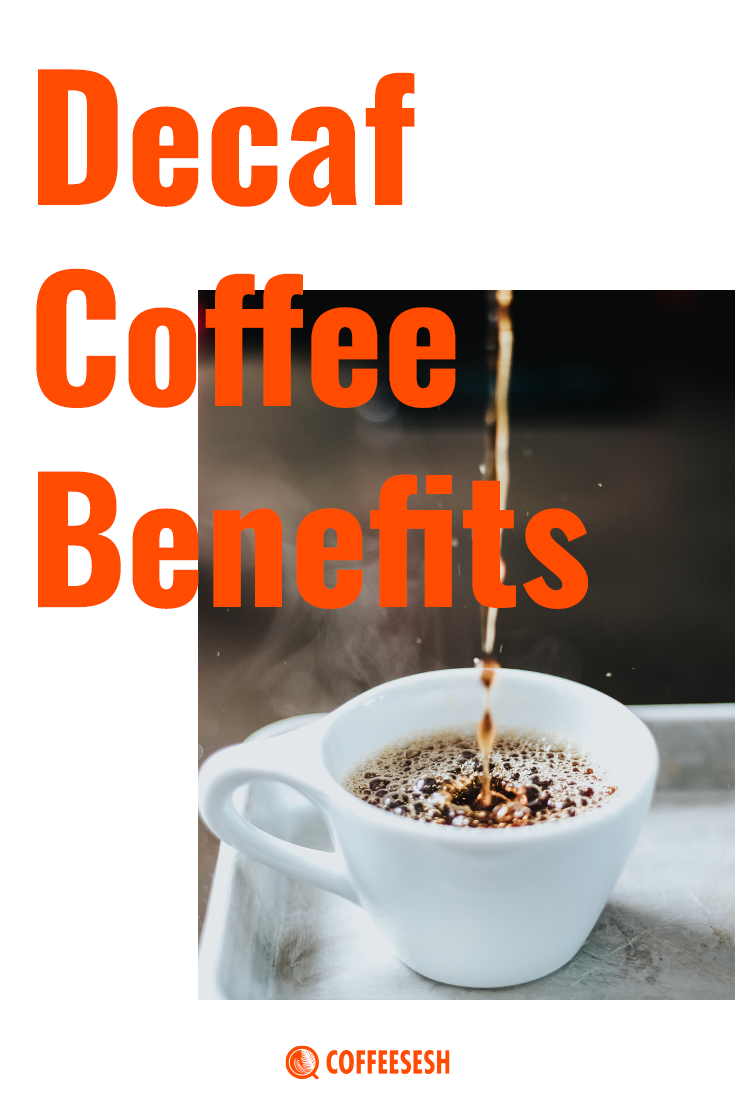 What’s the Difference Between Cold Brew vs Iced Coffee?

The Top 4 Most Expensive Coffees in the World

How Much Caffeine is in a Cup of Coffee?

Why Does Coffee Make Me Sleepy

Like 1
Close
Your custom text © Copyright 2020. All rights reserved.
Close