Everything You Need To Know About Turkish Coffee (Readers Review)

The Turks were one of the earliest peoples to have adopted coffee as a beverage, way back in the mid-15th century. There are two conflicting narratives regarding how exactly this transpired, but suffice it to say that Turkish coffee has become on the most popular and well-known beverages in the world. Yes, in the world!

Even if someone does not drink coffee, there is a good chance that they have heard of Turkish coffee, but don’t quite know what’s so special about it. Turkish coffee carries a legacy. It spans almost five centuries.

What is Turkish Coffee

Native Turks care deeply about the purity of the taste of their coffee. So much so that it is always served with water. The water enables consumers to wash off any aftertaste from a previous meal before taking their first sip. One cup of water, one cup of coffee.

Popular Turkish coffee like this is also prepared using a specific procedure that cannot be replicated in a machine and requires effort on the part of a host when serving a gathering.

The rich history means that there is much to know about this beverage. Turkish coffee has occupied a special place in the cultures of its citizens. From acting as an instrument for fortune-telling to being a test for marriage. It’s also a hotbed for political activism. Coffee has permeated the lives of people from all walks of life.

This article explores everything you need to know about Turkish coffee, and what makes it so unique. We’ll also discuss its historical tradition, the correct way to brew it, what Turkish coffee should (and can) taste like, and much more. Let’s continue sipping, shall we?

The History of Turkish Coffee

As we touched upon earlier, there are two conflicting narratives regarding how it is that coffee made its way to Turkey. According to one account, some Syrian refugees who settled in Turkey opened up the first cafes of the country. The other one claims that an Ottoman governor of Yemen discovered the beverage and introduced it to the Caliph, Suleiman the Magnificent. The sultan loved this new concoction and encouraged its consumption across his empire.

The previous story is the less glamorous one, but which story outlines the truth is a hard question to answer. Regardless, around a century after its adoption, coffee was outlawed on the orders of the new Ottoman ruler, and punishments included being beaten up, and even execution. However, massive unrest prompted a swift withdrawal of this unjust change.

Eventually, Turkish rulers spread their coffee to other parts of the world, most notably Europe, through France. They first experienced coffee in this very form, and the modern innovations on traditional techniques have all stemmed from Turkish coffee.

The evolution of coffee as an economically and culturally salient commodity in Turkey has been constant and rapid ever since, despite little innovation in the way this coffee is prepared. Today, Turkish coffee is listed in the UNESCO Intangible Cultural Heritage List. This inclusion is a recognition of the peace and love that coffee spreads in the country through the passion of its citizens, who genuinely enjoy their coffee, and demand the very best coffee.

Coffee is an integral part of Turkish culture. And this reflects both, in their language as well as their practices. A significant reason behind this is that preparing Turkish coffee needs time, providing ample time for conversation. The word for breakfast in Turkish translates to ‘before coffee’, and is but one of many words whose definition revolves entirely around coffee.

The Turks even have a saying for how coffee should be: “black as hell, strong as death, and sweet as love.” This contrast between bitterness and sweetness has been useful in its role as a facilitator of marriage in this country’s history. We’ll explain.

Historically, women in Turkey have been tested in their potential as brides based on their ability to make Turkish coffee. These women, in turn, used the way they prepared coffee to indicate their views on the potential bridegroom. If she made it bitter, that was a sign of disinterest, whereas sweet coffee meant attraction.

More recently, the tradition has been that the addition of salt or any other such peculiar ingredient. This practice is a deliberate test to observe whether her suitor would drink the coffee unquestioningly anyway. If he did, he was thought to possess patience and maturity.

These practices continue to this day, and are indicative of the importance coffee holds to deeply intimate traditions in Turkey and other cultures.

Besides uniting lovers, coffee houses also joined members of the same profession in earlier times. As coffee houses become widespread in Turkey, particular spots were increasingly frequented by specific sections of the population.

Artisans, poets and musicians, the clergy, all had their niche cafes that they visited, partaking in various other social activities like games as a result. This led to a healthy civic culture in the country. Many political dissensions have been mulled and planned over cups of coffee in the country. Although the cups probably didn’t like these back in the day.

Lastly, a peculiar part of the tradition behind Turkish coffee relates to the mystic art of fortune-telling. Because Turkish coffee is prepared unfiltered, the coffee grounds eventually sink to the bottom. After finishing your cup, a professional fortune-teller could read the alignment of specific patterns to assess your future.

How to Prepare Turkish Coffee— the Right Way

The way coffee is prepared is at the core of its significance to Turkish culture and its people. The way it is prepared provides people with time to converse. Its unfiltered process allows for fortune-telling.

The practice of serving water and a sweet candy along with Turkish coffee stems from both, the practical benefits these feature offer in terms of taste, and its utility as a social instrument to convey like or dislike, love or disdain towards another. But this has been discussed.

Turkish coffee is traditionally prepared in a vessel called ibrik, you can see exactly what it looks like here. These small copper pots are trendy in the country and are necessary to be able to experience this drink in its full capacity. Speaking of full capacity, an ibrik needs to be filled right up to the brim, and is one reason why preparing this coffee requires the right skill. Add sugar and wait for it to dissolve as the water begins to warm. Do not allow it to boil, however. Then, add one teaspoon of very finely ground coffee for every three ounces of water. Do NOT stir the mixture at any point. Once you’ve added the coffee, turn the heat to a low flame. The coffee grounds will eventually rest on the bottom.

Generally, Turkish coffee uses arabica beans. Because it can be dark roasted without turning too bitter. But in reality, robusta beans can also be used despite their inferior quality. However, the degree to which the beans are roasted can make a significant difference. Turkish coffee is consumed from fairly sweet, to quite bitter. Read more about the differences between arabica and robusta coffee beans here.

How to Make Turkish Coffee at Home

You can experiment between medium to dark roasts to judge which suits your palate the best. Furthermore, roasting causes beans to lose carbon dioxide. This leads to the generation of less foam in the next step of this preparation.

As the coffee beans begin to heat, they will start to foam, and the lighter the beans were roasted, the more foam will be created in this stage. It is also the step which makes the taste of Turkish coffee so delightful. Once the surface of the ibrik starts to foam, turn the heat off and stir down the foam.

Repeat the process of slowly heating and stirring down foam two more times, and on the third time, serve as the foam starts to form. Alternatively, you can avoid repeating and serve it after the first time.

Traditionally, the beans used for Turkish coffee are dark roasted to induce a concentrated flavor on the coffee. This was balanced with serving a particular sweet delicacy called Turkish delight. Nuts and pistachios are other accompaniments to this beverage.

Historically, serving delights with a cup of coffee was an indirect way for the host to ask their guest whether they were satisfied with the way the coffee had been prepared. Eating the delight signaled an affirmative, whereas declining it meant that the visitor was disappointed.

As for the water served with Turkish coffee, many mistakenly believe that the water is intended to be had between sips, or after the cup is finished. However, it is designed to be consumed before sipping the coffee to ensure a clean palate.

This was another social cue. If a guest refused the water, it meant that he was hungry and had likely not eaten. But if he did consume the water, the guest was probably full already. Isn’t that quite interesting?

What Do You Think About Turkish Coffee?

Turkish coffee, in its 500-year history, has wholly adapted itself to the peculiarities of Turkish society. It compliments their palate, their attitudes, and their social customs.

It is also one of the most sought after experiences in the world, and tasting Turkish coffee for the first time is bound to be a delight for any coffee lover. With our guide on how to brew your cup, there is no reason to hold back. Enjoy!

Also, before you leave and enjoy a great cup of coffee come join our exclusive community here at Daily Coffee Talk. We have lots of questions being thrown around about roasting and making coffee at home. Our members here answer all your questions and provide collaborate feedback, it’s an awesome place to be!

And on that note, we’ll brew you later! See ya 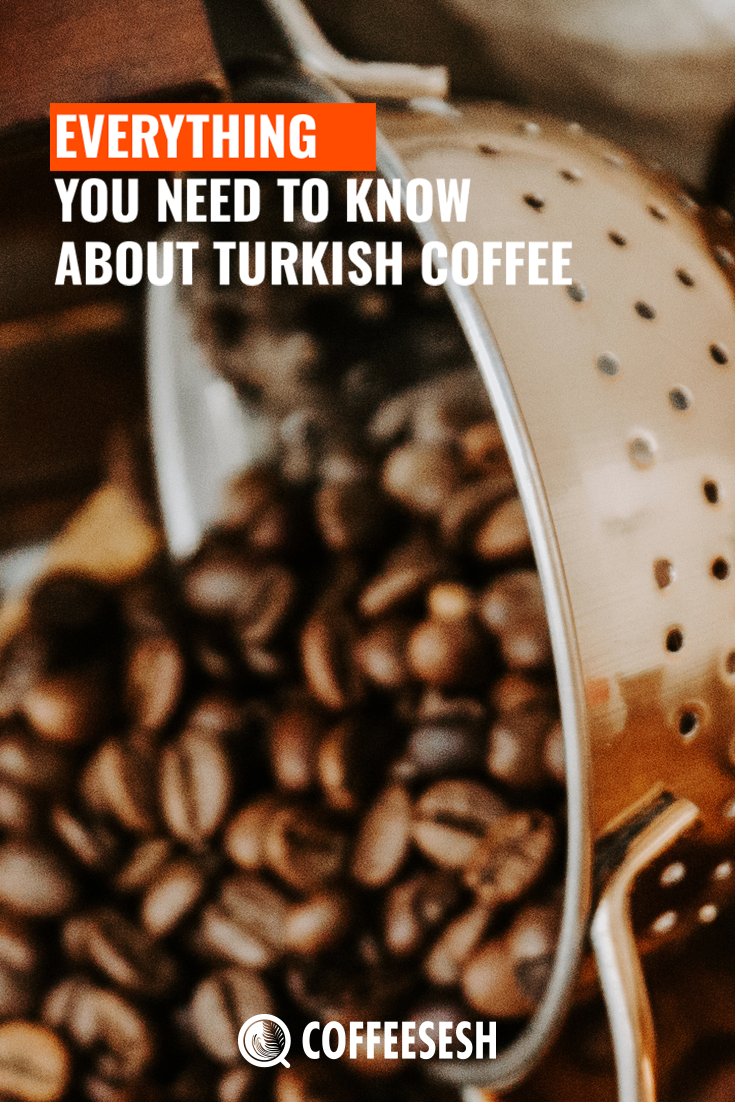 0
It's that time of the year: we need to keep updated on what's going on in the world of hybrid coffee makers....
Read more