Coffee Sesh
Inspo What is the Best Tasting Coffee in the World?

What is the Best Tasting Coffee in the World?

You’ve sampled Colombian coffees. Tasted the best Hawaiian Kona coffee. Tried Guatemalan dark roast, and your kitchen cabinets are filled to the brim with coffee beans from all around the world.

You’ve had a lot of great cups of coffee, we know. But now that you’ve tried every moderately priced bag of beans you can get your hands on, you’re ready to upgrade. You want to try gourmet coffee that will delight your senses and dazzle your tastebuds.

So why not treat yourself to a cup of the best coffee in the world?

The Best Coffee in the World

We think that Hacienda la Esmeralda in Panama produces the best coffee in the world. That’s a pretty bold statement, but it’s true!

They produce a special kind of coffee called Geisha coffee. It has better disease- resistance than a lot of other types of coffees, and a very unique flavor profile.

It has a sweet, floral flavor with hints of fruit like orange and passionfruit when brewed to perfection. You may also detect notes of jasmine, chocolate, and bergamot in your cup. Some people even say it tastes like Earl Grey or Jasmine tea!

What is Geisha Coffee?

Geisha coffee originated in Gesha, Ethiopia, which is how it got its name. The plant was brought to Central America and grown in Costa Rica before it eventually made its way to Panama in the 1960s. It gained popularity among growers because of its superior resistance to a disease called “leaf rust” that infects coffee plants in Central America.

Hacienda la Esmeralda in Boquete, Panama was the first farm to realize that Geisha coffee was special, and not just because of its disease resistance! They processed it by itself for the first time ever and realized that it tasted incredible.

Its strong floral notes and sweet, honeysuckle flavor make it taste somewhat more like tea than coffee. It also lacks acidity and full body that a lot of other coffees have, which sets it apart. It’s a pretty delicate coffee, and it’s one of the most unique, complex varieties out there. That’s why it’s won so many awards and commands such a high price!

So we’re not the only ones!

How Much Does Geisha Coffee Cost?

People are willing to pay a pretty penny to taste the best coffee in the world!

Coffee from Hacienda la Esmeralda costs as much as a really good bottle of champagne. It’s sold for as much as $600 per pound at auction! Seriously, just typing that gave us sticker shock.

There are less expensive ways to get your hands on some Geisha coffee, though. Other growers in Panama, Costa Rica, and Guatemala grow it and sell it for much less.

One of our favorite brands, Volcanica Coffee, sells Geisha coffee grown in Guatemala. It’s $49.99 a pound, which is much better than $600 a pound! You might actually be able to afford to drink this one every day.

It’s grown in a volcanic region of Guatemala that has fertile soil and high altitudes. These ideal growing conditions give the coffee a rich, delicious flavor and help bring out some of those floral notes this variety is known for.

Geisha coffee is meant to be savored! Sipping it slowly will give your palate a chance to detect all of those sweet, floral notes.

John Piquet, the owner of a coffee shop in Salt Lake City, suggests that you should drink your cup over a period of thirty to forty-five minutes to give each layer of flavor a chance to register on your palate.

In all honesty, we can’t wait that long… we down our cup within the first few minutes! But if you’re more patient than we are, you’ll get to taste several distinct layers of flavor.

If you want to best enjoy this coffee’s delicate, complex flavors, you should also prepare it in a certain way. It tastes best as a filter brew, not an espresso or latte. It’s hard to get the grind right and pull a good shot with this variety. It’s not worth the effort in our opinion!

You should also avoid adding a lot of milk to this coffee or turning it into a latte. The fruity, floral flavors don’t come through very well if you add a lot of milk and sugar. Trust us, you’ll enjoy your cup more if you drink it black!

Now that you know what the best coffee in the world is, are you going to buy some? Let us know in the comments section below or join 80,000+ people talking about coffee here. Also if you want to learn more about making coffee from people just like you, be sure to join our private Facebook group here at Daily Coffee Talk. You’ll be able to learn how to brew, how to roast and most importantly how to enjoy the perfect cup of coffee! 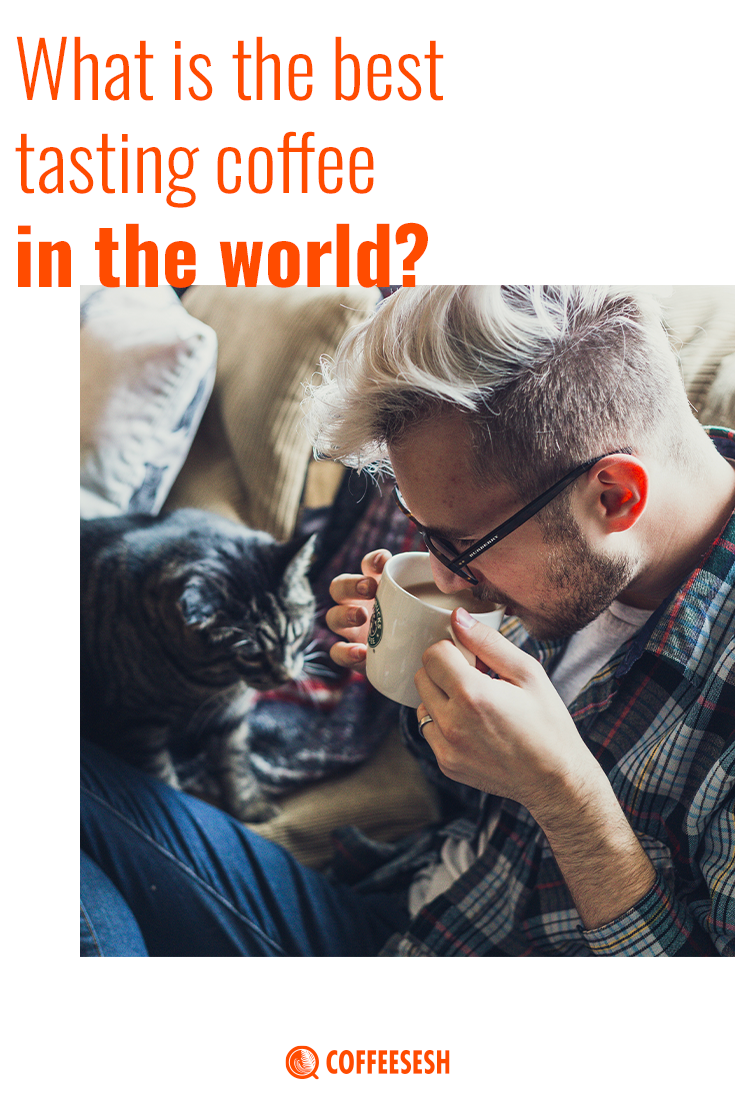 Pin14
Share
Tweet
Share
WhatsApp
14 Shares
Previous article6 Different Types of Espresso Drinks You Need to Try
Next articleCoffee Insight: How Much Caffeine is Too Much Caffeine?