An era is a long, distinct period of time. History books are divided by such frames of time, as are some Facebook albums, music, and (most importantly) coffee. Coffee has been around for centuries but people have found a way to categorize the time frame in which coffee and life around it has a distinct form to it.

Instead of eras, they’re called waves. Somewhat recent history has seen the first three of them, with the third and most recent wave signifying the biggest change in approach to coffee that we’ve seen. To understand the third wave, you have to know a little bit about the first two. Let’s dive right in.

Quite possibly the most widely enjoyed wave to hit American soil, literally, the first wave was when coffee was first brought in to American homes through the convenience of small tins and packages.

The best example of the first wave is the coffee aisle at all local grocery stores. There’s everything from grounds for your drip coffee machine, to instant coffee that only needs hot water. All convenient but all not necessarily amazing in flavor. If you want, you can make iced coffee at home using the methods we’ve highlighted for a better tasting cup than the traditional freeze dried coffee.

The first wave meant a lot of advertisements from Folgers and Maxwell House. Heartwarming commercials that showed how making coffee at home made waking up better or brought the family together. Coffee increasingly became a huge market to tackle.

This now seems like a no-brainer aspect of coffee, but at the time it was a newer concept. (Just like how bottled water used to be new). The only reason that this wave was able to happen because of vacuum packaging and instant coffee. Vacuum packaging allows beans to stay fresh as they sit in kitchen pantries. Long before that was even a concern, instant coffee was released in 1903 as a quick option to get coffee without equipment.

Few people were bothered by the watered down coffee that they were finally able to make at home, and almost no one asked where their coffee was coming from. Everyone was able to enjoy coffee, no matter how much money you had or where you were.

The second wave happened when coffee got its own bougie upgrade in the likes of coffee shops such as Starbucks. Consumers wanted better coffee all together, and were not afraid to go out and get it. Specialty coffee shops began offering experiences within their walls, with baristas creating coffee that people could not make at home.

Consumers and coffee connoisseurs started becoming familiar with new coffee trends and terms. Things like the french press became a buzz word. And questions like what makes a french press better than drip coffee were considered. All these ideas around better coffee surfaced, in a good way.

Every experience is almost exactly the same—Starbucks all around the world taste like the one a block from your home. Dutch Bros Coffee & Caribous Coffee were born out of this idea as well. Every other corner offered a new coffee experience—but they were all driven by big businesses. Prices went up but that was not an issue considering that people were buying their experiences and the consistency that comes from such coffee chains. Still, we can thank this chain for educating the masses on things such as espresso and lattes.

The waves don’t necessarily end but get over overpowered by the next. Starbucks is churning out more 5 pump skinny caramel macchiatos than ever, but with every cup sold there’s something just a bit more magical going on in the third wave.

Third wave coffee is less about the consumer and more about the coffee. Nowadays, most people would rather have coffee that comes from a direct trade and sustainable businesses over a fancy-yet-mysterious latte.

Companies like Intelligentsia and Counter Culture have paved the way for the third wave. These businesses do more than make a profit; they care about their products. Intelligentsia says that they “truly partner with [their] growers”, meaning they know exactly what product their getting and what it’s worth. This results in better quality coffee with a connection to where it comes from.

Artisan drips and the spread of nitro coffee has been fueled by the third wave. When a coffee shop knows more about their coffee, it means they can better put it to use. The third wave is a wave of passion. Every business wants to make a profit, but the third wave means it’s done with better intentions. From start to finish coffee is curated to be the best that it can be.

You have made the most of the third wave when you can drink your coffee black. People often think plain coffee is for people who have gone off the deep end, but really it means the coffee can stand on its own due to the way it was made.

Coffee from different places in the world have different flavor profiles, so down the processing line that same coffee can be roasted and ground in order to bring out the best flavors. Smaller businesses know more about their coffee, which results in rich flavors that don’t need a sugary creamer to dial it down. This sense of transparency from soil to mug has led to a better understanding of the science behind coffee, as well as creating an art out of it.

How to Get Involved in Third Wave Coffee

There’s nothing wrong with the convenience of Starbucks on a busy day. It’s just that on those day that you find yourself with a few extra minutes, use those to find a new small spot. It’s those spots that offer the best.

2. Strike up a conversation with your local barista.

You know you’re at the right place if your barista could talk coffee with you for hours. You don’t necessarily need to do that, but ask about the current roast or what their shop carries a particular coffee brand. Some coffee shops may even roast their beans in house, meaning there is a lot more to talk about. Doing so builds up your experience of third wave coffee

Once you’ve got a bag of coffee from your local shop, read what information they’ve chosen to share. Where is it from? Who grew the beans and roasted them? These are all important questions that matter now more than ever for your third wave experience.

As mentioned above, coffee has a lot to say when you give it the spotlight. Put your coffee to the test by skipping the creamer. Are their fruity or chocolate-y notes? Is it over extracted? These are things that are fun to pay attention to, and interesting to experiment with depending on the coffee that you get and where you get it. The third wave removes the debate over dairy-based versus non-dairy-based creamers, because you really need neither one if the coffee in front of you is as good as it should be for your experience.

Don’t stop at the labels. Read about whatever you find interesting, whether that be the growing process or how coffee is roasted. The third wave means we get to know more about we we are consuming, we can be happier about where are money goes, and that we can become educated on the beverage that consumes too much of our thoughts. And before you know it, you may be reading about the fourth wave.

Thanks for reading our newest article on third wave coffee. Be sure to share and join 80K+ other people following @coffeesesh. Also if you want to learn more about making coffee from people just like you, be sure to join our private Facebook group here at Daily Coffee Talk. You’ll be able to learn how to brew, how to roast and most importantly how to enjoy the perfect cup of coffee!

We’ve been able to partner with Audible.com to get everyone here on Coffee Sesh 2 FREE audio books of your choice. We’ve been listening to some ‘how to make latte art’ books and so far so good! Just follow the link above to learn more. 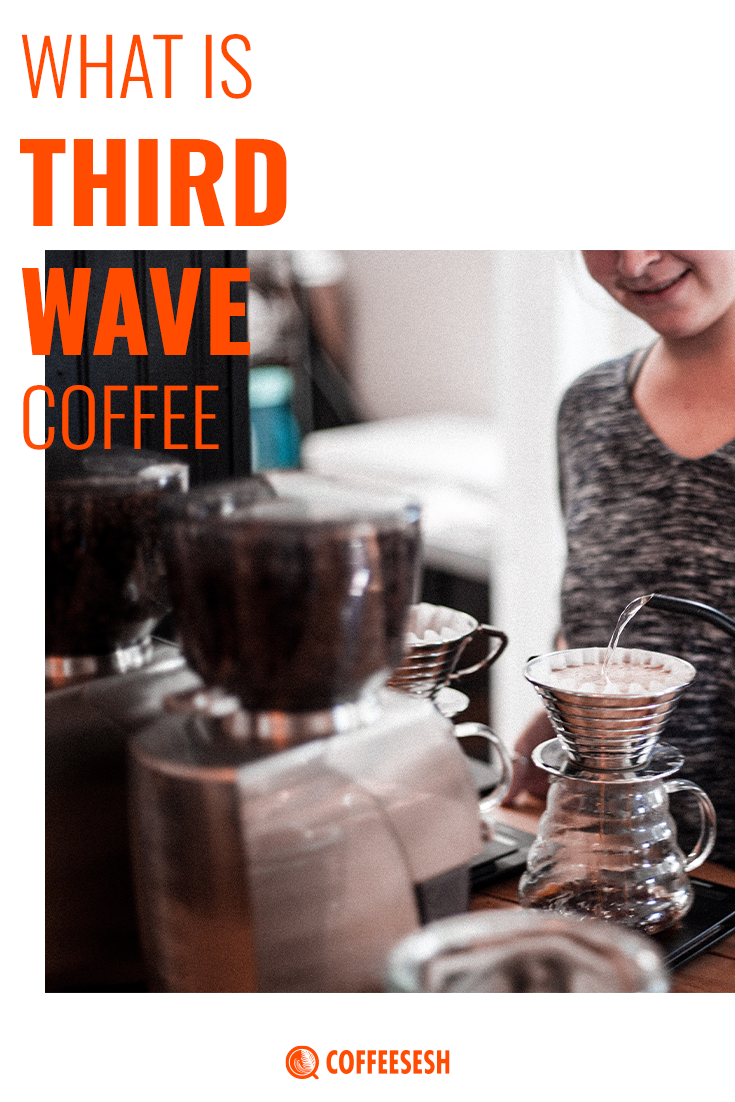 Different Types of Coffee Filters on the market